The Chemist by Stephenie Meyer

She used to work for the U.S. government, but very few people ever knew that. An expert in her field, she was one of the darkest secrets of an agency so clandestine it doesn’t even have a name. And when they decided she was a liability, they came for her without warning.

Now she rarely stays in the same place or uses the same name for long. They’ve killed the only other person she trusted, but something she knows still poses a threat. They want her dead, and soon.

When her former handler offers her a way out, she realises it’s her only chance to erase the giant target on her back. But it means taking one last job for her ex-employers. To her horror, the information she acquires makes her situation even more dangerous.

Resolving to meet the threat head-on, she prepares for the toughest fight of her life but finds herself falling for a man who can only complicate her likelihood of survival. As she sees her choices being rapidly whittled down, she must apply her unique talents in ways she never dreamed of.

In this tautly plotted novel, Stephenie Meyer creates a fierce and fascinating new heroine with a very specialised skill set. And she shows once again why she’s one of the world’s bestselling authors. 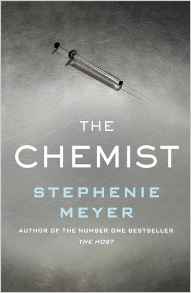 If you have any preconceived ideas about this book because it has been penned by the author of the Twilight series, please disregard them now.

All the characters have well developed back stories which are revealed during the course of the story and are well defined and with their own personalities which both clash and compliment the other characters.

The Romance between Alexa and Daniel is well written and does not overshadow the seriousness of their situation, nor does it stop the action dead but actually helps with the plotline.

Daniel’s brother is tough yet protective of him and as a team, the three characters work extremely well together, despite their disagreements and initial distrust of each other.

The science depicted in the plot is scarily believable and Meyer conveys a sense of menace that the government – any government could be developing these kinds of truth and torture drugs.

A fantastic read for any thriller lover.

I have been collecting Marilyn Monroe items since 1990 and the collection includes around 400 books, as well as films, documentaries, dolls, records and all sorts of other items
View all posts by Andrea Pryke →
This entry was posted in Thriller and tagged Stephenie Meyer. Bookmark the permalink.

2 Responses to The Chemist by Stephenie Meyer