Published by The History Press

Carole Lombard was the very opposite of the typical 1930s starlet. A no-nonsense woman, she worked hard, took no prisoners and had a great passion for life. As a result, she became Hollywood’s highest-paid star.
From the outside, Carole’s life was one of great glamour and fun, yet privately she endured much heartache. As a child, her mother moved Carole and her brothers across the country away from their beloved father. Carole then began a film career, only to have it cut short after a devastating car accident. Picking herself back up, she was rocked by the accidental shooting of her lover; a failed marriage to actor William Powell; and the sorrow of infertility during her marriage to Hollywood’s King, Clark Gable.
Lombard marched forward, promising to be positive. Sadly her life was cut short in a plane crash so catastrophic that pieces of the aircraft are still buried in the mountain today. In Carole Lombard, bestselling author Michelle Morgan accesses previously unseen documents to tell the story of a woman whose remarkable life and controversial death continues to enthral. 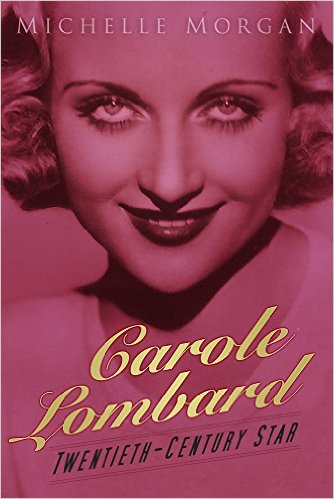 I have only read a couple of books about Carole Lombard, one, Gable & Lombard, Powell & Harlow, is really a short piece of fluff, I bought for mainly the Harlow content and the other Fireball by Robert Matzen focuses mainly on the plane crash that took her life and the lives of the other passengers aboard the DC-3 and not with her life although we are given an overview of it. Michelle Morgan’s book focuses on her life and career and of course the plane crash is mentioned but she does not go into any gory details, and if that’s what you’re looking for move along.

Once again Morgan does not embellish any rumours or scandals that plagued Carole, and they are mention in a sensitive and respect manner as Morgan deals only with the facts.

And Carole comes to life because of this and wherever possible Morgan has used quotes from Carole herself and this really shows Carole as a human being, from her early days to her untimely death, I found in this book a woman I would love to have known, and perhaps called a friend, a kind and loving woman, but hard-working and tough when she needed to be and she was loyal to fault. We learn how she changed as she got older, how much her fellow actors and her crews loved working with her and no matter what the role she was given, how hard she worked to be the best that she could be.

As with all of Morgan’s work the narrative in Carole Lombard – Twentieth Century Star – flows beautifully and seamlessly through her life.

A wonderful tribute and stunning biography of a woman who had so much more to give, and left not only her husband devastated at her passing.

I have been collecting Marilyn Monroe items since 1990 and the collection includes around 400 books, as well as films, documentaries, dolls, records and all sorts of other items
View all posts by Andrea Pryke →
This entry was posted in Biography, Cinema, Non-Fiction and tagged Carole Lombrad, Clark Gable, Michelle Morga. Bookmark the permalink.