The Toy Breaker by Roy Chester

Dr Hannah Nightingale faces a race against time to stop the evil serial killer known as the Toy breaker
Someone is snatching small children from their beds in the middle of the night. They leave a sinister calling card behind: a broken handmade puppet on the child’s pillow. The press nickname the kidnapper the Toy breaker. In a desperate move, Superintendent David Mallory calls in criminal profiler Dr Hannah Nightingale to help with an investigation that is going nowhere.
More children disappear and the city of Garton is on the edge of panic. A very dark mind is at work, but why does the Toy breaker suddenly change his method, adding a lock of hair to the crime scene. When a prime suspect escapes, the police appear to have reached another dead end. Will the Toy breaker be stopped before more families are destroyed?
This is a fast-paced thriller that will have you turning the pages till the action-packed ending. 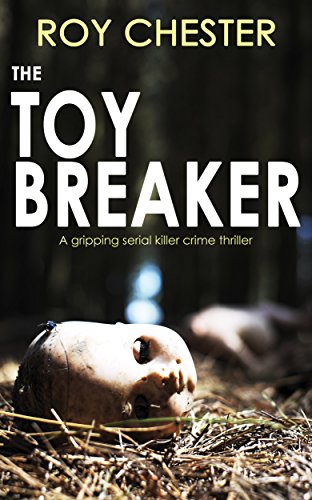 This was a dark and disturbing crime thriller brilliantly constructed and executed by Chester. All the characters are well defines and the procedural aspect of the police work in the book is fascinating.

The hunt for the Toy Breaker twists and turns as various suspects are discovered and then eliminated.

The plot is very well thought out and every twist and turn builds the suspense and makes perfect sense.

Profiler Hannah Nightingale is a brilliantly writing character, human with flaws, she makes mistakes and admits them, she doesn’t give off airs that she knows better than everyone.

There are sub-plots within the pertaining to the police and their official and unofficial code of conducts and all of these are resolved by the end of the book nicely, leaving no cliffhangers.

The climax of the book is thrilling and heart-stopping and Chester’s writing style is the reason for this.

While the nature of the crimes is disturbing and upsetting, he treats it with sensitivity and allows all of his characters even the hardened police officers to show their sensitivity and horror at the events that occur.

This is a must book for lovers of thrillers

I have been collecting Marilyn Monroe items since 1990 and the collection includes around 400 books, as well as films, documentaries, dolls, records and all sorts of other items
View all posts by Andrea Pryke →
This entry was posted in Crime, Pyschological Thriller, Thriller and tagged Clowns, Roy Chester. Bookmark the permalink.