Only the Willing – Allison Cosgrove

A young girl trying to turn her life around takes pity on a lonely looking man one night… the next morning, Homicide Detective Stan Brookshire is called to one of the most gruesome crime scenes of his career.
Unfortunately, the killer left behind no evidence, leaving Stan almost nothing go to on and under immense pressure from the Chief to solve the case quickly, or let it go cold.
Meanwhile, the killer’s rage is spiraling out of control. He feels that he’s doing the world a favor and has no intention of stopping.
Will Stan’s instincts once again come through on this case? If he doesn’t catch a break – and soon – he’ll be forced to move on, letting the killer run free. 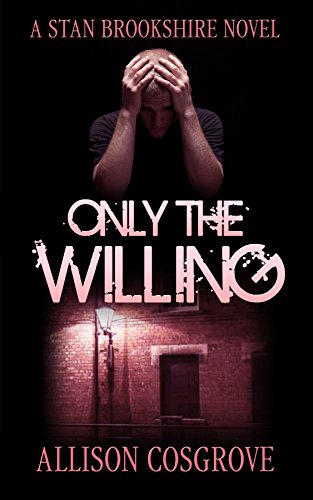 This book was free from Netgalley in exchange for a fair and honest review.

This was a very interesting murder thriller, the description of the first victim we came across in the book, immediately made me think of Mary Kelly and Jack the Ripper – with the way the victim was red headed and blue eyed and that her body was ripped to shreds like Kelly (all but the face – obviously I have an unhealthy interest in the Ripper murders and must read more), and was a prostitute as well.

The beginning of the story is well written, the characters are well defined. Stan and Jane are two committed hard-working cops, Stan is divorce and Jane married, but they work so well together and complement each other even when disagreeing.

The killer’s mind and reasoning for the killing is well thought out and described.

We see the killer alternate between sanity and madness, with paranoia taking over leading to complete recklessness on his part.

The only thing that let –this book down was that the ending felt really rushed, the rest of the book was nicely paced but at the end as the killer let his paranoia take over it felt like the author ran out of ideas and rushed headlong to the conclusion, this was great shame as the premise of the book like the beginning was brilliant.

I have been collecting Marilyn Monroe items since 1990 and the collection includes around 400 books, as well as films, documentaries, dolls, records and all sorts of other items
View all posts by Andrea Pryke →
This entry was posted in Crime, Thriller and tagged Allison Cosgrove. Bookmark the permalink.