Dying to get Published by Judy Fitzwater

Jennifer Marsh is a mystery writer with a stack of eight unpublished manuscripts and rejection letters to match filling her closet. She’s sure that if she can just get famous for something, someone will have to publish her books. Why not murder?
She’ll find a target so mean that she’d actually be doing the world a favour by bumping him or her off. And she knows just the person:
Penney Richmond, a high-powered literary agent who’s made it her job to ruin people’s lives. All Jennifer has to do is frame herself, do the deed, and come out with an iron-clad alibi, and she’ll be well on her way to getting a three book deal. So what if she chickens out at the last minute? A vegetarian good girl who rescued a greyhound could never actually kill someone. But when Penney is found murdered and the police think Jennifer did it, she’d better find the real murderer before she goes away… for life.
Along with her eccentric writer’s group, spunky old ladies with a nose for sleuthing, her neurotic greyhound, and a sexy, sarcastic reporter named Sam, Jennifer embarks on a journey filled with danger, deception, and disguises that could leave her Dying to Get Published… 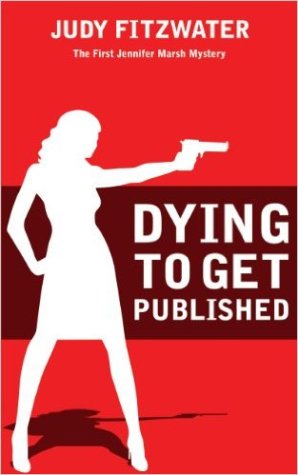 At first I didn’t think I was  going to enjoy this at all. At firs the main character, Jennifer Marsh seemed so shallow, who would seriously considering committing a murder to get their book published? So I put the book down for a while and read something else, and I am glad I did, because when I came back to it, something clicked and I loved it, it was fresh and funny, with Jennifer accused of murdering the literary agent who turned down her novel and whom, she fantasised murdering, enlisting her author friends and people she had met at the murdered woman’s apartment building, in clearing her name.

Jennifer’s disappointment and anger at her work being rejected again and again is something that we can all empathise with, a the apprehending of the killer is both hysterical and believable.

The characters are well written and Jennifer’s realisation that maybe her books aren’t quite good enough because she doesn’t dwell on the actual murders enough and that she really doesn’t have it in her to be a killer, is gradual, as it would be in real life.

I have been collecting Marilyn Monroe items since 1990 and the collection includes around 400 books, as well as films, documentaries, dolls, records and all sorts of other items
View all posts by Andrea Pryke →
This entry was posted in Crime, Humour, Review and tagged Judy Fitzwater, Murder. Bookmark the permalink.