The dead, however, don’t care. So when Balthazar Kovacs, a detective in the city’s murder squad, gets a mysterious message on his phone from a blocked number, he gulps down the rest of his morning coffee, grabs his police ID and goes to work. The message has two parts: a photograph and an address. The photograph shows a man lying on his back with his eyes open, half-covered by a blue plastic sheet. The address is 26, Republic Square, the former Communist Party headquarters and once the most feared building in the country. But when Kovacs arrives at Republic Square, the body has gone…

Kovacs’ investigation will take him deep into Budapest’s shadows, an underworld visitors never get to see: the gritty back alleys of District VIII; the people smuggling networks around Keleti Station; the endemic corruption of a country still haunted by the ghosts of history. And when the leads point to the involvement of his brother Gaspar, the city’s most powerful pimp, Kovacs will be forced to choose between the law and family loyalty. 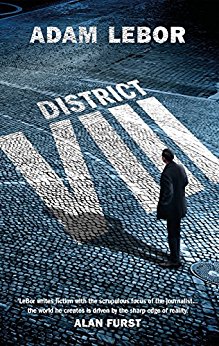 This book was provided free of charge by Head of Zeus

This book is a cleverly written crime thriller set during the Budapest migrant crisis of 2015, when Keleti Station was closed down to transport for migrants due to the vast numbers arriving there to try and make there way to West Europe.

The characters are brilliantly written and fleshed out with our main character the police detective Balthazar both believable and sympathetic.

The plot is cleverly woven around the true events of people smuggling and political corruption and intrigue. Lebor wastes no time in getting his characters into the thick of things, with secret police, crime bosses and reporters all after the same thing.

Fast paced and with man twists and turns as Balthazar investigates the death of a migrant that the authorities are trying to cover, threats to his life and that of his family ensure that this is a real page turner that you will not want to put down until you reach the end.

This appears to be book one in a series and if  Lebor, like most writers gets better with each book, the crime reading public is in for a treat as District VII satisfies every need on a crime story, heroism, villains, corruption and justice, even if that justice is not exactly the justice that would ideally take place.

You won’t regret picking this book up!!!

I have been collecting Marilyn Monroe items since 1990 and the collection includes around 400 books, as well as films, documentaries, dolls, records and all sorts of other items
View all posts by Andrea Pryke →
This entry was posted in Blog Tours, Crime, Review and tagged Adam Lebor, Budapest, District VIII, Keleti Station. Bookmark the permalink.