This book of quotes explores the many sides of the one-and-only Marilyn Monroe. In her time, she was perceived as a victim, a vixen, a valentine, and a Venus. At once a sex symbol and enormously talented entertainer, she was praised, criticized, and adored during her lifetime. After her tragic and untimely death she became the most famous female face of the twentieth century, and her legacy continues to thrive through today. 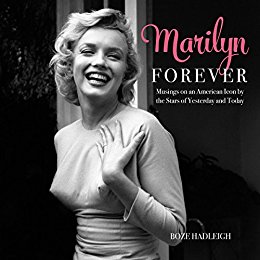 This book is filled with quotes from famous people both from Marilyn’s time and today. There are four chapters in this book – Venus, Vixen, Valentine and Victim, and there is a epilogue that contains some of Marilyn’s own quotes as well. The book is peppered with the photographs, sadly they are mostly very famous ones, but they illustrate the text beautifully.

All the quotes are interesting, not all are flattering but this is a great little book and well worth adding to your collection.

I have been collecting Marilyn Monroe items since 1990 and the collection includes around 400 books, as well as films, documentaries, dolls, records and all sorts of other items
View all posts by Andrea Pryke →
This entry was posted in Biography, Review and tagged Boze Hadleigh, Marilyn Monroe, Marilyn Qoutes. Bookmark the permalink.