Q & A with Carol Fraser author of The Summer House Party

Where did the idea for The Summer House Party come from?

I am a great lover of English fiction of the 1930s and 40s, particularly writers like Dorothy Whipple and Winifred Holtby, and I wanted to write a novel set in that era. The run-up to the war, and its dramatic effect on everybody’s lives, struck me as a wonderful theme for a novel, and a country house party seemed the ideal setting for the opening, as it’s the perfect way to introduce characters and to depict events that are going to affect their lives for years to come.

How did you conduct your research for the historical aspects of the book?

There’s a huge wealth of material relating to the Second World War and the years that preceded it, so that part was straightforward, but researching the domestic detail of people’s everyday lives at that time was more challenging. I found the best way was to read women’s fiction of the period, which gives wonderful detail which you wouldn’t find on Google. That said, I also favour a scatter-gun approach to research, because the internet can unexpectedly throw up random and fascinating information. In fact, one of the key plotlines in the book is based on a true story that I stumbled across during my research – it took one of the characters, Paul, in a direction I’d never considered. It’s also important as a novelist to wear your research lightly – you might learn a thousand fascinating things about what life was like in the blackout, but readers don’t want a history lesson. So I might read pages of stuff just to finish up with one scrap of information that I can use to give the thing authenticity.

Can you explain your writing process? Do you sit and write as it comes to you or do you plan every part out?

I suppose my writing process is quite organic, by which I mean that when I start a novel I have a rough idea of its theme and plot, but I don’t necessarily have fixed ideas about where it’s going. I like to be true to my characters and allow them to shape things. There will be times in a story when I’m about to have a character do or say something, and I’ll think – hold on, she wouldn’t do or say that, she’d do or say this instead. Characters really take a hold of you in that way. They become like real people, and you can’t let them act in a way that’s literally out of character. I tend to go with the flow, though there is always a point in a book, about two-thirds of the way through, where you have to start weaving plot-lines together to bring it all to a satisfactory conclusion. With The Summer House Party, which has a lot of characters and covers a timeline from 1936 to 1945, I finished up drawing up an enormous chart to work out who did what, where and when, to keep things consistent.

If you could meet any author from history who would it be and why?

I think it would be fascinating to meet Charles Dickens. He’s one of my favourite authors, and I would love to talk to him about the way he plots, and how he feels about his characters. Most of my novels, like his, are set in London. Dickens spent days and nights walking through just about every part of London, getting to know and

understand its inhabitants, and it would be wonderful to hear from him what the city was like almost two hundred years ago. I could also tell him how it’s changed since his day. When he was writing, the Monument to the Great Fire of London, near Cannon Street, was the tallest structure in the City – I think he might be interested to know how the area looks these days! 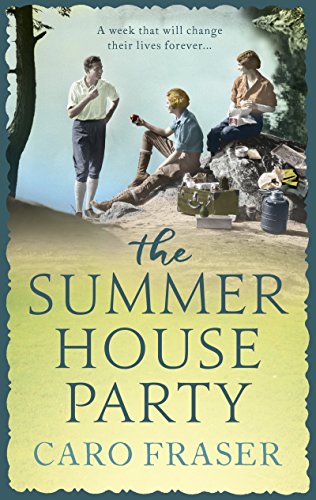 When writing what are the two most important things to have with you?

Although like most writers I write on a computer using a keyboard and screen, I need pen and paper next to me to jot down scraps of research and random ideas. Not very original, I’m afraid!

Once you have a complete first draft, approximately how many times do you revise and edit it?

I’ll usually go through the first draft a few times tightening things up, taking out unnecessary bits, making sure there’s a consistency about everything. When I first started writing I worked on a typewriter, and as you can imagine, working like that doesn’t give you the scope and freedom to revise that a screen does. I think I only retyped my first novel, The Pupil, only once before submitting it.

I know your father was a writer, what did he think of you following in his footsteps?

He was delighted, and not in the least surprised. Like him, I was writing from an early age, though we were both in our forties when we published our first novels.

He was the author of the Flashman series, and was a natural storyteller. I think I am, too.

When I was a child he encouraged me to read anything and everything, which is the best start any aspiring writer can have, and when I was about eight or nine he gave me my first typewriter, an old Remington, on which I bashed out poems and short stories.

What subject would you most like to write about in the future?

Not a clue! I find that when I open The Times in the morning, three or four plot ideas jump out at me before I reach page 6. You never know what will strike you as a good subject for a novel. Next year, after I’ve finished the sequel to The Summer House Party, I intend to get started on the eighth novel in the Caper Court series of legal novels, but I haven’t quite worked out what my star character, Leo Davies, the brilliant but amoral QC, will be getting up to.

What is the one piece of advice that you would give to any aspiring writer?

I’d tell them not to feel inhibited, to write what inspires them. I’d also advise them to develop a discipline, to try and write a certain amount every day, because everyone can start a novel – finishing it is the hard bit.

Corrie, because it has humour as well as drama, and it’s taught me a lot about plotting

Christmas with my family

Cornwall – give me a UK holiday every time, despite the unpredictable weather

I have been collecting Marilyn Monroe items since 1990 and the collection includes around 400 books, as well as films, documentaries, dolls, records and all sorts of other items
View all posts by Andrea Pryke →
This entry was posted in Blog Tours, Q&A and tagged Caro Fraser, Head of Zeus, The Summer House Party. Bookmark the permalink.