The Garden of Evening Mists by Tan Twan Eng

In the highlands of Malaya, a woman sets out to build a memorial to her sister, killed at the hands of the Japanese during the brutal Occupation of their country. Yun Ling’s quest leads her to The Garden of Evening Mists, and to Aritomo, a man of extraordinary skill and reputation, once the gardener of the Emperor of Japan. When she accepts his offer to become his apprentice, she begins a journey into her past, inextricably linked with the secrets of her troubled country’s history. 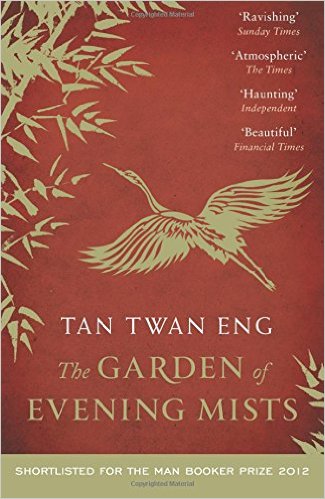 This book was both beautiful and harrowing at the same time as Yun Ling tells us the story of what happened during the war and afterwards, when she was apprenticed to the former gardener of the emperor of Japan and their complicated relationship.

The text is beautifully written and extremely descriptive and although I desperately wanted to know the entire story as quickly as possible I felt that rushing through this book would be a disservice to the author’s gorgeous style.

It is no wonder that this was shortlisted for the 2012 Man Booker and won the Man Asian prize, I will admit that this is the first Man Booker nominee that I have read as I have always been intimidated by the books on the list, but this was so well written and the characters so real that I will be reading more Man Booker nominees in future and I hope to pick up Tan Twan Eng’s first book, The Gift of Rain sometime soon.

This book will make you think about world history and a part of World War 2 that we don’t often hear about, the suffering of the people in this book seems to be neglected while the holocaust is regularly (and quite rightly) written about.

I have been collecting Marilyn Monroe items since 1990 and the collection includes around 400 books, as well as films, documentaries, dolls, records and all sorts of other items
View all posts by Andrea Pryke →
This entry was posted in Historical Fiction and tagged Malaya, Tan Twan Eng. Bookmark the permalink.