The one who doesn’t go straight home, the traitor,

The friendless one, the cat of the wood…’

A lost boy. A dead girl, and one who is left behind.

Robbie doesn’t want anything more to do with death, but life in a village full of whispers and secrets can’t make things the way they were.

When the white hare appears, magical and fleet in the silvery moonlight, she leads them all into a legend, a chase, a hunt. But who is the hunter and who the hunted? 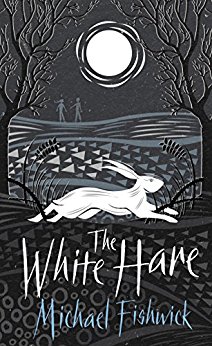 This book was sent to me by the publisher in exchange for a fair and honest review.

This is first book in Head of Zeus’ new children’s imprint Zephyr.

Although I found the first chapter of this book a little bit difficult and confusing to read, the book soon picked up as Fishwick got into his stride and began revealing the characters secrets, Robbie is a typical boy, who having lost his mother to cancer, has gone off the rails a little, especially as his Dad quickly remarried, although his stepmother comes across as a little cold towards him, it becomes apparent that she is trying her best in a difficult situation.

Mags, Robbie’s friend is mysterious and only reveals her story a bit at a time.

The story is gripping as we learn about Fran, Mag’s best friend, who killed herself  after her relationship ended with the town bad boy. The mystery and local legend of the White Hare, is wonderfully constructed and woven into the story and the connection to Mags and Fran is clever. Robbie’s character is slowly revealed over the course of the book as we learn how frustration with his mother’s illness causes his behaviour problems and how he comes to terms with her death and his father’s remarriage.

This is a modern day fairy tale and any one who says it is to dark to be one has never read any of the original Grimm’s Fairy Tales.

I have been collecting Marilyn Monroe items since 1990 and the collection includes around 400 books, as well as films, documentaries, dolls, records and all sorts of other items
View all posts by Andrea Pryke →
This entry was posted in Blog Tours, Children's fiction, Magical Realsim, Review and tagged Head of Zeus, Michael Fishwick. Bookmark the permalink.