Five years ago, Rosa walked to the end of the pier in the dead of night. She looked into the swirling water, and jumped. She was a brilliant young Cambridge student who had just lost her father. Her death was tragic, but not unexpected.

Was that what really happened?

The coroner says it was. But Rosa’s boyfriend Jar can’t let go. He sees Rosa everywhere – a face on the train; a figure on the cliff. He is obsessed with proving that she is still alive. And then he gets an email.

Find me, Jar. Find me, before they do…

Is Rosa really dead? And, if she is, who is playing games with the ones she left behind? 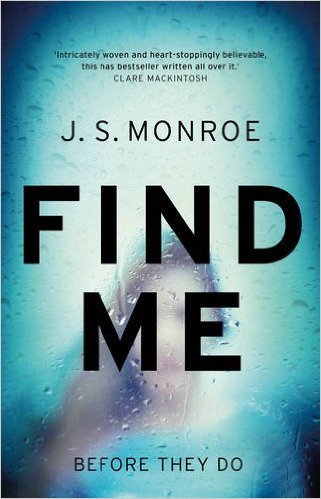 This is a nicely paced thriller, the story is split into two parts, in part one we meet Jar, he is unable to accept that his girlfriend Rosa killed herself and is trying to investigate what actually happened to her. We also meet his girlfriend, Rosa, her story is being told in the form of a diary and leads up to her alleged death.

The character of Jar is brilliantly written, he is convinced that Rosa is alive and that he has seen her, and we are led to believe that he is suffering from hallucinations. The plot is intricately constructed and clever, with misleading information, a seemingly vile policeman and some apparently under cover agents for the government.

In part two, Monroe brings in the point of view of another character and the true story of what happened to Rosa begins to unfold. The plot twist is not a sudden shocker, but gradually revealed, which to me worked very well and was actually far more horifying than the quick reveal that many other writers use, in this book a quick revela would have ruined the tension that Monroe brilliant builds up.

The ending is also brilliand as Monroe does not gloss over everything that has happened to our main characters, he does not provide a twee happy ever after ending, but gives a true life ending that is extremely poignant as he advises that although Rosa and Jar’s ordeal is over physically, pyschologically it is going to take a lot longer for them to recover.

One of the must read books of the year

If you want to see a video review please click HERE

I have been collecting Marilyn Monroe items since 1990 and the collection includes around 400 books, as well as films, documentaries, dolls, records and all sorts of other items
View all posts by Andrea Pryke →
This entry was posted in Pyschological Thriller, Thriller and tagged Head of Zeus, J. S. Monroe. Bookmark the permalink.