The Sekhmet Bed by Libbie Hawker

The second daughter of the Pharaoh, Ahmose has always dreamed of a quiet life as a priestess, serving Egypt’s gods, ministering to the people of the Two Lands. But when the Pharaoh dies without an heir, she is given instead as Great Royal Wife to the new king – a soldier of common birth. For Ahmose is god-chosen, gifted with the ability to read dreams, and it is her connection to the gods which ensures the new Pharaoh his right to rule.
Ahmose’s elder sister Mutnofret has been raised to expect the privileged station of Great Royal Wife; her rage at being displaced cannot be soothed. As Ahmose fights the currents of Egypt’s politics and Mutnofret’s vengeful anger, her youth and inexperience carry her beyond her depth and into the realm of sacrilege.
To right her wrongs and save Egypt from the gods’ wrath, Ahmose must face her most visceral fear: bearing an heir. But the gods of Egypt are exacting, and even her sacrifice may not be enough to restore the Two Lands to safety.
The Sekhmet Bed is the first volume of Libbie Hawker’s series The She-King, a family saga of the Thutmosides, one of ancient Egypt’s most fascinating royal families. Don’t miss Book 2: The Crook and Flail 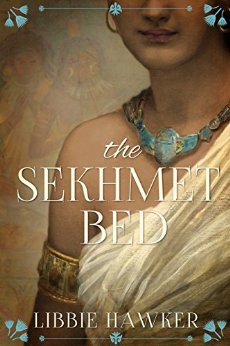 I love history, particularly ancient Egyptian history, so when I saw this was a free kindle download I added it to my downloads straight away.

The book is based on the life of the female Pharaoh Hatshepsut, and the detail included in the book shows that the author has done her research, and as she is also a historian, I would expect nothing less.

The characters are beautifully written, Ahmose, our heroine ‘chose of the Gods’ is so likeable and childlike as she should be as she marries Thutomses when she is still just a child, and we see her grow into a strong young woman, her older sister Mutnofret is suitability scheming as the displaced sister who should have been Great Royal Wife instead of Ahmose, but instead is 2nd Royal Wife, while still an honour this does  not hold the power she craves and that Ahmose has, but again as the story unfolds and they are struck by tragedy as well as joy, she grows as a person and softens to her sister..

Knowing that this story is based on historical facts and real events has actually made me more interested in the history of the time and want to find out more about Hatshepsut and her people.

Although I have the eBook of this, it is such a good book that intend to get the whole series in paperback as soon as I can as well as read other books by Libbie Hawker – definitely an author to look out for.

I have been collecting Marilyn Monroe items since 1990 and the collection includes around 400 books, as well as films, documentaries, dolls, records and all sorts of other items
View all posts by Andrea Pryke →
This entry was posted in Historical Fiction, Review, Uncategorized and tagged Ancient Egypt, Hatshepsut, Libie Hawker. Bookmark the permalink.