And the Companion Guide to Affairs Valentino.

On August 23rd, 1926 silent film star Rudolph Valentino died unexpectedly at thirty one years of age. His sudden death caused mass hysteria among his throngs of fans. They were not the only ones to mourn. Valentino’s close friend and business manager, George Ullman, was left to the task of settling the “Sheik’s” affairs, both business and personal. As Ullman struggled to clear Valentino’s $300,000 debt ($3 million by today’s monetary standards), he found himself mired in a web of shady characters, antagonistic Valentino family members and power hungry movie moguls. Little did George Ullman know that his involvement in settling “Rudy’s” business affairs would change his life forever. However Affairs Valentino is not only the story of George Ullman. Fifteen years in the making, author Evelyn Zumaya uncovered never before seen documents, business accounts and Ullman’s lost personal memoir. This new information contributed to a drastically changed version of Rudolph Valentino’ s life story than the one that is known today. Was he gay? Was he straight? Was he a brute or bookworm? Why did he really come to America? Zumaya answers these questions and more. Zumaya faced fierce opposition in bringing this book to publication. Risking her own safety and even death threats from Valentino cultists, Zumaya remained determined to share the true documented facts of Rudolph Valentino’s story. 585 pages long, with 66 pages of references and 59 never before seen photos, the long-awaited Affairs Valentino has finally arrived to set the standard for authoritative Hollywood biography. 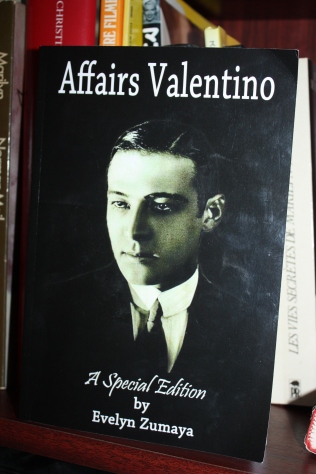 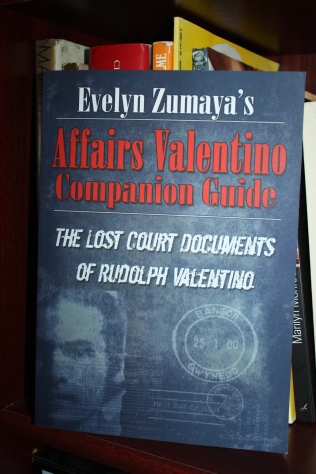 When Rudolph Valentino died in 1926, the movie going public were in shock, how could a young and apparently healthy man suddenly die.

Furthermore, Valentino was heavily in debt and his estate basically worthless, due to his reckless spending habits.

Valentino’s business manager and executor, George Ullman turned the estate around and within a few years had assets of around $300,000, what he didn’t count on was the vindictiveness of Valentino’s older brother, Alberto and Nephew Jean.

The problem arose because a part of the will called Paragraph 4 was missing for several years and George began paying out sums of money to the three supposed benefactors, however when Paragraph 4 finally turned up it was discovered that Valentino had left his entire estate to Jean.

Alberto immediately launched legal action which resulted in a order that George must repay the amount he had paid out to the benefactors.

This is a well written and gripping account of the troubles that George Ullman and the Valentino estate were beset by, but, also looks at the life of this remarkable man, and even carries the story on years after his death.

I did not want to put this book down as the story is so fascinating; why did the original probate records disappear from the hall of records?  The removal of the records itself is a criminal act, and the author spent a long time tracking down copies held in San Francisco. (Copies of which are reproduced in the companion guide for reference purposes.)

Some of the writing is speculative and the author admits this, particularly when it comes to the parentage of Jean, whom she believes was actually Valentino’s son, she basis her reasoning on this because not long before he died Rudolph tried to legally adopt Jean and when that failed, left his estate to him instead, this is something that is naturally, denied by the family.

The companion guide holds the reproductions of court transcripts and other documents that Zumaya used when researching and writing her book, and is worth buying just to use as a reference point.

I gave Affairs Valentino 4 out of 5* on Goodreads.

I have been collecting Marilyn Monroe items since 1990 and the collection includes around 400 books, as well as films, documentaries, dolls, records and all sorts of other items
View all posts by Andrea Pryke →
This entry was posted in Biography, Cinema and tagged Cinema, Probate, Rudolph Valentino. Bookmark the permalink.