Through a haze of cigarettes and vodka there lies a version of Prague in the heart of the Cold War, where spies practice sorcery in their games of intrigue. While the political lines may be as clear as the Iron Curtain, the battles of magic seldom stay clean and the combating forces of Ice and Flame dance across borders and loyalties. Tanya Morozova is a KGB officer and the latest in a long of Ice sorceresses; Gabe Pritchard is a CIA officer and reluctant Ice recruit. Enemies at one turn, but forced into alliances at the next, their relationship is as explosive as the Cold War itself.
The Witch Who Came In From The Cold is an episodic serial presented by Serial Box Publishing. This collected omnibus edition gathers all 13 episodes from Season 1. 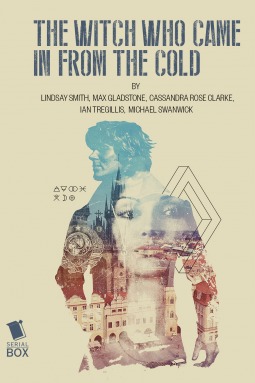 I wasn’t actually sure if I was going to  enjoy this book when I first started it, as it was quite slow to get started and the magical elements of the story were not obvious. Originally this was published in weekly installments by Serial Box but I got the complete season in one go from Net Galley, so I didn’t have to wait for the next episode, which was a good thing as, by the end of episode 3 I was hooked and did not want to put it down!

The characters are well written and very believable, set in Prague 1970, the Cold War between East and West is raging, with the KGB and CIA/MI6 trying to turn agents to their cause, however another far more dangerous war is raging between two magical factions: the Consortium of Ice and the Acolytes of Flame.

Our hero, if he can be called that is a CIA agent named Gabe and his body has been hijacked by an element, that requires a predetermined host, he is not that host and his body rages war with the interloper, who gives him the ability to sense magic, he initially does not want to pick sides between the Flame and Ice, but soon comes to realise that he will have to.

This was such a good read, that I fond myself talking to the characters as if they could hear me, the way you would when shouting the answers to the contestants on a quiz show, this is something that rarely happens to be and only when I am deeply involved with a book and care about the characters..

If you like Espionage with a touch of Magical Realism than this is for you.

I have been collecting Marilyn Monroe items since 1990 and the collection includes around 400 books, as well as films, documentaries, dolls, records and all sorts of other items
View all posts by Andrea Pryke →
This entry was posted in Espionage, Magical Realsim, Thriller and tagged Flame, Ice, Magic, Prague, Spies, Witch. Bookmark the permalink.